“The momentum for an increasing population seems to be difficult to change.”

March 17, 2019—–During the earliest stage of modern humans the human species was struggling with the environment. They were just beginning to use stone tools. The size of the population was limited by the amount of wild food that could be gathered or caught. When food was scarce the population died back, and when it was plentiful the population expanded.

Diseases due to technological advances began at an early time. Sinusitis is a disease that irritates the nose as a result of breathing damp, smoky, or dusty air, such as was often found in inhabited caves. Evidence of sinusitis has been detected in skulls dating well back into the paleolithic. Only limited numbers of human lives were lost from storms and other short lived events as the population was small and widely scattered.

Although life was difficult for hominoids during this time, the human species triumphed. Charles Darwin stated the case for these early people. “Man, in the rudest form in which he now exists, is the most dominant animal that has appeared on earth. He has spread more widely than any other highly organized species, and all others have yielded before him.” (1871)

The global population numbers began to grow and are now growing faster than at any time in history. We are now adding about 224,000 people per day to the planet. This adds 82,000,000 people to the planet each year. That annual increase is the same as adding the population of the United States to the planet every three to four years.

What is astonishing in the growth data is how fast the rate of growth has been increasing. It took hundreds of thousands of years for the first billion to be reached in about 1800. The time it has taken for adding each billion has dropped rapidly. The last billion was added in just 12 years from 1999 to 2011. At the beginning of 2019 global population stood at about seven billion. The key element in driving population growth is changing technology which has increased the global food supply.

Adding the billions Time Span for the growth:

The human population reached its highest annual growth rate of about 2 percent per year, in the early 1970s. The growth rate in 2018 was around 1.1 percent. While the rate has dropped the absolute number of humans added to the planet each year continues to be greater than in the past. In mid-2019 the total population is estimated to reach about 7.7 billion.

What is Carrying Capacity?

Today the fastest-growing countries are the developing countries. Many of the nations with the highest growth rates are in Africa and southwest Asia. China has the largest population of any country. However, India, which has a smaller population than China but has a higher growth rate, is adding 1/3 more people each year than is China. The UN projects India to surpass China as the most populous country in the world about the year 2028. At that time both countries will have a population of about 1.45 billion. China’s population will begin to stabilize near that time and India’ will continue to grow for some time. Most of the growth will be in developing countries with more than half in Africa. Population in Sub-Saharan Africa is projected to double from the 2010 population of 0.86 to 1.96 billion in 2050.

With climate change will there be enough resources for all?

The next billion people added to the earth will want and expect food, clothing, shelter, and some means of employment. How are these needs to be met? There are already a billion people with some degree of malnutrition. Most of the population supports themselves from agriculture. All good and even marginal land is already occupied, and much productive land is being removed from agriculture due to erosion and general depletion. How are these agriculturists going to find employment? These are critical issues.

The momentum for an increasing population seems to be difficult to change. Global business thrives on population growth. It seems the options are limited. Either the human species understands what is taking place and mandates a change, or these trends will continue until some unpredictable apocalypse eliminates a substantial portion of the people living at the time.

“The demand and supply of food has been in a delicate balance for the human species throughout history.”

October 30, 2018—–The term famine produces an image of starvation and suffering in the minds of most people. In general a famine is a lack of food sufficient to produce malnutrition in large numbers of people over a wide area. The United Nations considers several conditions for a regional food shortage to be considered a famine. They are:

1. At least 20% of families in the area face extreme food shortages that they cannot cope with.
2. Acute malnutrition in children exceeds 20%.
3. The death rate exceeds two persons for each 10,000 people per day.

The Role of Climate Change in Historic Famines

There are many causes of famine, including climate changes, war, and political policies. One of the major ones is drought. Most of the catastrophic famines in historic times have been precipitated by drought. Drought can affect the quality and quantity of crop yields and the food supply for domestic animals. In the case of severe drought there may be a substantial loss of domestic animals due to lack of food. The loss of milk products or meat itself can precipitate the effects of the drought.

The demand and supply of food has been in a delicate balance for the human species throughout history. When the food supply has increased there has been a gain in population, and when food has been in short supply there has been some sort of trauma inflicted on the populace. Starvation results from insufficient food intake. During the long period of the hunting and gathering societies, starvation was probably often near at hand for individuals, family groups and tribes.

Millions effected by the drought

The development of agriculture allowed the world population to expand rapidly and greatly. At the same time, the basis for the supply of food, namely agriculture, became more directly dependent upon the weather. Famine as a phenomenon did not become a part of human experience until after agriculture began. However, as agriculture expanded so did the frequency of famines. The number of times that famine has spread on the continents is enormous. Nearly all histories of peoples and nations record famines.

Great famines have occurred throughout the Asian continent. India, China, Russia and the countries of the Middle East have all suffered from famine, many times which were drought related. An example is the famine described as occurring during the time of Abraham (about 2247 B.C). Another massive famine occurred in Egypt prior to the exodus of the Israelites. Drought and famine are endemic in India and China. The oldest record of famine in India goes back to 400 B.C. and in China to 108 B.C. Since the time of the earliest known famine there have been nearly continuous episodes of drought and famine in many parts of Asia or Africa.

The Impact of Drought in Developing Countries

Drought has a much greater impact on people in developing countries than it does in industrial societies. The primary reason for this is that in the developing countries there is more dependence on agriculture as a way of life. When crops fail, or there isn’t enough forage for livestock, there is an immediate effect on the populace.

A very positive aspect of famine is that they are becoming fewer and less extensive due to the ability of the global economy to move large quantities of food from place to place.

“There is no easy solution to the growing human stress, but there are humane solutions.”

August 12, 2018—-People in many parts of the world move in a rhythmic fashion with the seasons. Some follow herds of livestock or wildlife that move with the seasonal rains. However, the use of the term human migration is generally applied to those people that move from one region to another on a long term, or permanent basis.

People have been migrating from the time the species originated. Today migrants number in the millions and they frequently cross national borders. They are fleeing from violence, hunger, unemployment, and poverty. Unfortunately, doors are legally closing for many of them and so they turn to crossing borders illegally. Most of these are soon caught and taken to detention centers. Such detention centers are found in many countries in Europe as well as in the United States, Australia, and Japan. How long they are detained in detention centers varies considerable. Some are held for a specific period of time and in some centers they are held indefinitely. Most are sent back to the country of origin. A few are granted entry visas. 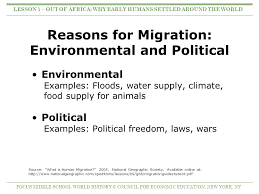 Overpopulation can lead to migration

In mid-summer of 2018, there are millions of people attempting to cross international borders. Up until recently there has been a major flow of refugees across national borders. Examples are the steady flow of refugees across the Mediterranean Sea into Greece, Italy, and other countries. At present a wave of nationalism is spreading across the earth greatly slowing or stopping this flow. This is visible in the alt-right movement in Europe.

The alt-right consists of a group of organizations made up of white supremacists. It includes neo-Nazis and Holocaust deniers. As a result, immigration is being limited. The primary reason is there are no longer economic opportunities available for the incoming migrants in the destination countries. These countries are already experiencing over-population. Where there has been over-population in many of the less developed countries, it is becoming apparent even in the developed countries. 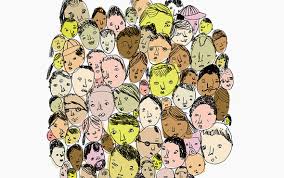 The examples presented here are just that. The problem also exists along national borders in Africa, Asia, and South America. Widespread over-population results in more and more attempted migration. At the same time there is increased resistance to immigration by more and more nations.

Adding another 83,000,000 people to the planet each year can only exacerbate the problem. There is no easy solution to the growing human stress, but there are humane solutions.