“By using the newest technology of planting seeds by drones, Droneseed has increased the speed of reforestation.”

With climate change and the warming of our planet comes forest fires as evidenced by the recent fires in Australia. The wildfire season has gotten considerably longer and drought has fueled the fires. Rising temperatures evaporate more moisture from the ground and vegetation turns dry with lack of moisture. These events lead to a longer wildfire season. Acres and acres of forest and prairie act as tinder for any mistake by nature or man. Deforestation has many devastating results including erosion and furthering the effects of global warming by destroying a forest’s contribution to clean air, turning carbon dioxide into oxygen.

In the past reforestation depended on humans carrying seedlings, planting each nursery grown seedling by hand as they walked across the deforested areas. If reforestation does not take place in these areas, erosion washes away the top soil and unwanted invasive plants and ground cover may eventually take the place of native trees. 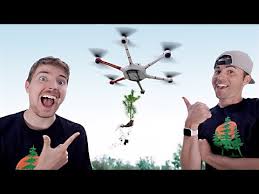 Droneseed is a relatively new company that is reseeding destroyed forests by dropping tree seeds by drones, mitigating the devastated areas. They are a Seattle-based group of people interested in using technology to help save our planet. They work with the Nature Conservatory and some of the largest lumber companies in the world. According to their website, http://www.droneseed.com, they are a team of “ nursery managers, foresters, ecologists, biologists, and engineers who love the data, theory, and the hands-on work necessary to grow forests.”

In an interview by Devin Coldeway (@Techcrunch), founder and CEO Grant Canary Canary stated, “I started looking into how it’s done today,” he told me. “It’s incredibly outdated. Even at the most sophisticated companies in the world, planters are superheroes that use bags and a shovel to plant trees. They’re being paid to move material over mountainous terrain and be a simple AI and determine where to plant trees where they will grow — microsites. We are now able to do both these functions with drones. This allows those same workers to address much larger areas faster without the caloric wear and tear.”

I have witnessed first hand the devastating changes from forest fires. With the beetle kill causing rapid flames to spread, the Hayman fire was Colorado’s largest, over 138,000 acres, rapidly spreading over the Colorado Rocky’s beautiful terrain. Riding past this area several years later revealed acres and acres of new ground cover with a few cabins that the forest service saved, standing alone amongst the baron, black terrain left by the fire.

Droneseed is on the forefront when it comes to mitigation of deforested areas. Using the newest technology of planting seeds by drones they have increased the speed of reforestation. According to Techcrunch.com, in the article, That Night a Forest Flew Droneseed, “Earlier this year, DroneSeed was awarded the first multi-craft, over-55-pounds unmanned aerial vehicle license ever issued by the FAA. Its custom UAV platforms, equipped with multispectral camera arrays, high-end lidar, six-gallon tanks of herbicide and proprietary seed dispersal mechanisms have been hired by several major forest management companies, with government entities eyeing the service as well.These drones scout a burned area, mapping it down to as high as centimeter accuracy, including objects and plant species, fumigate it efficiently and autonomously, identify where trees would grow best, then deploy painstakingly designed seed-nutrient packages to those locations. It’s cheaper than people, less wasteful and dangerous than helicopters and smart enough to scale to national forests currently at risk of permanent damage.”

Droneseed packages seeds to drop from their drones by studying the soil and matching the packages closely with the nutrients and soil PH of the area in need of reforestation. They dust the outside of the seed with capaicin, which creates the heat in hot peppers, to keep wildlife from eating the seed.

Droneseed expects to take its services worldwide, thus speeding the growth of deforested areas and pulling carbon dioxide out of our atmosphere and replacing it with oxygen. This process, in return, will slow down our planets warming climate, making our planet livable for future generations.