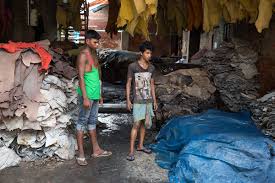 March 26, 2017—-Following is a recent article concerning Bangladesh, child labor and the polluting tanneries published by the Associated Press.

In a Planet Earth Weekly article, May 2014, Bangladesh: The Poster Child for Climate Change https://planetearth5.com/?s=bangladesh I recieved the following comment about the tanneries from Solid Bangla, a newspaper in Bangladesh:

solid bangla..
June 18, 2014 at 1:54 am
Such a good article. Bangladesh is going through its most difficult time and things seem to get worse. Climate change will severely affect Bangladesh for sure and also the rise in tanneries and unregulated brick fields are ruining the environment so badly. Corrupt politicians can not see this as most of them are uneducated and corrupt. But thanks for identifying some good and concerning sides. Good job and good luck to Bangladesh. 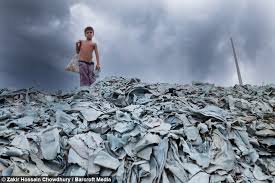 The Polluting Tanneries of Bangladesh Mar 24, 11:37 AM EDT
BY MARTHA MENDOZA AND JULHAS ALAM
ASSOCIATED PRESS

DHAKA, Bangladesh (AP) — Hazardous, heavily polluting tanneries, with workers as young as 14, supplied leather to companies that make shoes and handbags for a host of Western brands, a nonprofit group that investigates supply chains says.

The report by New York-based Transparentem, released to The Associated Press on Friday, didn’t say leather from the tanneries ends up in American and European companies’ products, only that the manufacturers of some of those goods receive it.

Some companies say they’re certain the leather used to make their products was imported from outside Bangladesh, and the manufacturers concur. Still, in response to the report most brands had switched factories, banned Bangladesh leather or demanded improvements and audits.

The abuses alleged have long plagued Hazaribagh, a Dhaka neighborhood that’s the hub of Bangladesh’s leather industry with more than 150 tanneries. The air is noxious with an eye-stinging rotten-egg odor, and children play on small hills of rotting hide trimmings. The Buriganga River, a source of drinking water for 180,000 people, shimmers with poisons from tannery chemical runoff, as well as other human and industrial waste.

The $1 billion-a-year industry was ordered to shut down and move more than 15 years ago, but deadlines have passed without consequence and fines go unpaid. Last week, Bangladesh’s High Court told authorities to stop supplying gas, water and electricity to the tanneries. Rawhide supplies have also been ordered halted.

And yet they’re still in business, fueled by consumer demand for ever-more-stylish but low-priced wallets and boots.

Its confidential Hazaribagh report and accompanying video, shared late last year with about a dozen U.S. and European brands and companies, showed workers at five different tanneries bent double under the weight of soaking wet cow hides, shuffling past heavy machinery delivering heavy loads. Workers are seen whipping handheld razors through leather, tossing off loose trimmings. Barrels of chemicals lean against walls. The floor is wet, and some workers are barefoot.

Bangladesh law prohibits workers under 18, but some appeared to be teenagers. The report says that in 2015, a mother confirmed her child working in a tannery was 14. Footage from 2016 showed the child was still working there. On the video, a 17-year-old told the videographer his age. And there’s 2016 footage of two workers agreeing that there are 15-year-olds onsite.

Transparentem is not publishing its findings but showed the video to an AP reporter before sharing the report. It said the discretion was needed to protect its investigators and the workers, and that the research is ongoing. 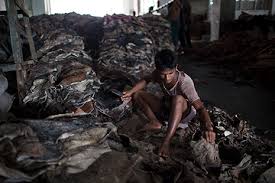 No one followed a piece of leather produced by a child to a particular purse or shoe.

E. Benjamin Skinner, founder and principal of Transparentem, said the group investigates endemic problems within an industry, and looked into Apex and Bay because they are among the largest.

“We tell brands and retailers what they may not, but should, know about those with whom they do business. This gives them the opportunity to use their influence with their suppliers to address questionable activity and advance positive action,” Skinner said.

The American and European brands that responded to queries from the AP stated their commitments to prevent labor abuse in manufacturing. But some brands, the Bangladeshi companies involved and industry officials disputed the report’s findings.

“That NGO went to our buyers too,” said Shahin Ahmed, chairman of the Bangladesh Tanners’ Association. “They showed them some video clips of child workers who are engaged in manufacturing some byproducts. … They are no way part of the main industry, I can challenge anybody.”

Syed Nasim Manzur, managing director of Apex Footwear and a director at the Apex Tannery, calls Hazaribagh “an environmental disaster” and said they’ll soon close their plant there. But he said the report is a “smear campaign,” allegations of child labor are unsubstantiated, and Hazaribagh leather doesn’t end up in exported products.

Manzur said Apex Footwear and Apex Tannery are separate entities, although they have some owners in common and are associated businesses. He said Apex Footwear has two separate shoe-making factories, one for local markets and another, across the street, for exports. The Hazaribagh leather goes only to the local factory, he said.

“We worked with the International Labor Organization and trade unions. I don’t understand how and where they found child workers in the industry,” Rahman said. “We don’t have any child workers.”

Coach – whose website says their produce is “handcrafted from the finest American and European hides and textiles” – said they get no more than 1.5 percent of their leather from Hazaribagh and Kate Spade said they get just 1 percent. Both said they’re stopping any purchases from Hazaribagh.

Michael Kors and Harbor Footwear said they were a few steps removed from the Hazaribagh tanneries, hadn’t knowingly sourced leather there, and would make sure not to.

Clarks and Deichmann said they are certain no Hazaribagh leather ended up in their products.

Sears, Timberland, Macy’s, Genesco and Steven Madden all said that while they weren’t getting leather from the tanneries, they saw an opportunity to use their companies’ leverage at the related factories to bring improvements, with some using threats, others offering auditors and support.

Scott Nova at the Worker Rights Consortium in Washington, D.C., said a brand or retailer that is serious about protecting worker rights, and about honoring its public commitments to do so, would not do business with a factory that sources from suppliers that engage in dangerous and abusive practices.

“This principle applies, whether or not leather from the tanneries in question is being used in a brand’s products,” he said.

Global brands are drawn to manufacturing in Bangladesh by low wages, and leather shoes, belts and purses are top exports. But many Bangladeshi manufacturers depend on domestic tanneries for their leather, and 90 percent of those tanneries are in Hazaribagh.

Conditions in the neighborhood are deplorable. Chemicals and defecation run milky-white through open sewers, pouring untreated into the river, more of a waste pond than a waterway. Metal tarnishes quickly; electronics corrode.

AP journalists were not allowed inside Apex and Bay’s Hazaribagh tanneries, but workers walking out said no children were employed there now.

Reporters did find children working in smaller Hazaribagh tanneries not mentioned by Transparentem. The work is hazardous, with large equipment and little to none of the protective clothing, splash aprons, safety goggles and respirators mandatory at North American and European tanneries.

The AP team watched as a man tasted liquid from a drum that processes leather to test for salt levels.

“We would hope to avoid the harm that can be caused by the liquid when the body and the limbs are exposed to it,” said another Hazaribagh leather tanner, Mohammed Harun, 52. “There are some powders and chemicals that infect us when inhaled.”

He said they need boots, gloves and masks.

“If the owners provide us with these things, it will improve the situation,” he said.

A British Medical Journal study published this week found that Bangladeshi tannery workers as young as 8 frequently have untreated rashes and infections, as well as asthma and other lung problems. Pure Earth – a nongovernmental organization that addresses industrial pollution – has put Hazaribagh on its Top 10 list of polluted places, along with Chernobyl. Similar problems exist at tannery clusters in the Philippines and India.

Human Rights Watch advocate Richard Pearhouse, who has reported on pollution and child labor at Hazaribagh tanneries, said none comply with national environmental laws or repeated court orders to move.

American shoppers can make a difference, he said.

“Consumers should be asking plenty of sharp questions on the shop floor about what retailers are doing to guarantee they are not sourcing leather from Hazaribagh’s toxic tanneries,” he said.