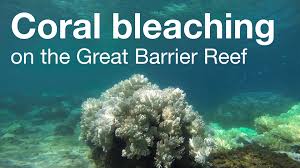 “The dying of the reefs is attributed to a process known as bleaching.”

July 19, 2018—–Coral reefs are one of the richest ecosystems on the planet. They differ from land ecosystems in that the major populations making up the system are animals rather than plants. Land ecosystems include forests, grasslands and deserts, for example. Coral reefs essentially consist of animal species. The huge variety of animals includes those with backbones and those without. The most prevalent animals are those without backbones such as sponges, snails, clams, scallops and squid. Better known animals are starfish and sea urchins.

Coral reefs are also home to nearly a fourth of all species of fish. The primary food for the animal species is algae. The algae supply the animals with sugars and oxygen in return for shelter and carbon dioxide. These microscopic algae are responsible for the basic color of reefs. 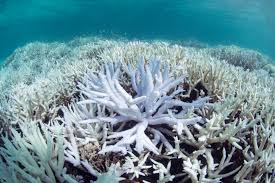 Bleaching occurs when the reef is under stress.

Rising sea temperatures are resulting in massive destruction of the reefs. They are dying at an unprecedented rate. Massive bleaching events have been largely an event of the last 40 years. Prior to that, bleaching events occurred an average of every 27 years. The first massive bleaching was recorded in 1982-83. There is no record of large scale bleaching prior to that time. Now severe events are averaging about every six years.

Bleaching of the Reefs

The dying of the reefs is attributed to a process known as bleaching. The bleaching is actually the result of the death of the microscopic algae that both color and feed the coral. When sea water gets too warm for prolonged periods of time, corals become stressed, causing them to expel the algae. This expelling of the micro-organisms leaves the coral appearing bleached or whitened.

Coral can survive for a period of weeks without the algae, but with longer periods of time the algae begins to die. A number of factors can cause the algae to die, but only warmer than average water temperature can cause widespread loss. It can occur with sea temperatures being as little as 1°C (2°F) above normal monthly temperatures. 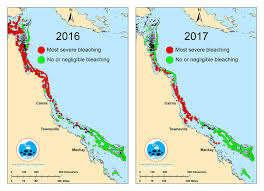 The Great Barrier Reef lies off the coast of Australia. In 1981, it was listed as a World Heritage Site. It is the earth’s largest system of coral reefs. It is one of the largest heritage sites covering an area of more than 336,000 square kilometers (130,000 square miles). It consists of nearly 3000 individual reefs of varying size and almost 1000 islands, also of varying size.

At the time of this writing a greatly expanded area of coral bleaching has been detected off the east coast of Australia. Almost all of the reefs from the city of Cairns northward show evidence of bleaching. Since Australia is in the Southern Hemisphere, water temperatures are the warmest around the north end of the reef nearest the equator and decrease southward. In all, nearly half of the reef is suffering bleaching.

In 2017, the Great Barrier Reef off Australia experienced its second year in a row of extensive bleaching. At least a third of the reef was affected reducing the variety of species. The risk to the reef is due to both global warming and more frequent episodes of abnormal warming.

The Future of the Reef

In the summer of 2018, the future looks bleak for the reef. Reefs can make a substantial start to recovery from bleaching events in 10 years or longer. The problem is that now the interval between events is getting shorter and there is insufficient time for the corals to recover.

At the current rate of warming, by the middle of the 2030’s, severe bleaching may occur as often as every two years. Within 35 years ocean temperatures may rise enough to essentially prevent reefs from surviving in large areas!