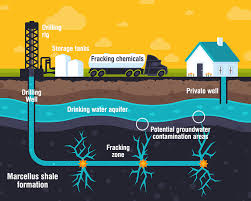 “The essence of what the legislature and government have done is to give energy corporations a license to drill, wherever and whenever, they want!”

October 12, 2016—Fracking, as a mining tool, continues to spread! It has long been known by geologists that shale deposits deep underground often contain natural gas. In recent decades there has been a growing fracking industry, based on mining oil and natural gas from these deposits.

The Process of Fracking

The process if fracking involves drilling vertically into a deep shale deposit. Once in the shale, the drill is turned to work horizontally. A variety of chemicals and other ingredients are sent down the well under high pressure. This breaks up the shale and releases the oil or natural gas. This form of well drilling is called hydraulic fracturing or fracking. There are thousands of such wells in the United States and the number is growing rapidly. In the U.S. most of these wells are concentrated in the Southwest.

While fracking produces large amounts of natural gas, there are a number of problems which result from this technique. In the drilling stage, there is often a flow back up the well that sends a mixture of methane and drilling material to the earth’s surface and into the atmosphere.

Methane is 20 times more effective, weight to weight, in absorbing earth radiation than is carbon dioxide. It is second only to carbon dioxide as a greenhouse gas emitted by industries in the U.S. The combination of carbon dioxide and methane combined account for 93% of greenhouse gas emissions at present! A survey of fracking sites in Pennsylvania revealed drilling operations emitting plumes of methane, up to 1000 times greater than the standards the EPA are in the process of finalizing.

Fracking is now the largest source of methane emission in the United States! It contributes to the concentration of methane in the atmosphere and, thus, to global warming. Fracking is associated with increasing earthquakes and a methane cloud above the earth. The concentration of these wells in some regions has also led to other problems. In the Great Plains, swarms of earthquakes have recently occurred which are associated with fracking. Earthquakes have always occurred in Oklahoma, but they have increased rapidly in the past few years. In September of this year, about 250 earthquakes were recorded and there have been more than 2500 in the past year.

These earthquakes have been attributed to the injection of waste water which results from the drilling of wells based on fracking. The volume of waste water injection has increased nearly 80% in just the past six years. To reduce the hazard the government ordered several dozen waste water wells in one area shut down. In addition to the increasing number of earthquakes, a long lasting methane cloud has also appeared over parts of the great plains. The cloud covers more than 2500 square miles and is centered over New Mexico. At last report the cloud was still growing and adding to global warming problems.

In spite of the problems associated with fracking some states actively encourage the mining process. Among these is North Carolina. For years horizontal drilling for oil and gas was banned in order to protect the ground water supply upon which so many depended for fresh water. That protection was totally abandoned in 2012. In that year the Republicans controlled the legislature, passing a bill that legalized horizontal drilling and making fracking legal. The next year the U.S. Environmental Protection Agency offered North Carolina $500,000 in grants to fund water quality monitoring in areas most likely to be affected by fracking. The North Carolina Department of Environment and Natural Resources rejected the grant. The state now protects the mining company’s right to drill.

Fracking is contributing to earthquakes in the U.S.

Fracking and Lack of Regulation

In 2014 the legislature of North Carolina passed legislation which hastened the prospects for fracking in North Carolina. The legislation prohibits any local government, such as cities or counties, from attempting to regulate fracking in any manner. It also protects energy companies from any legal actions taken by individuals. The legislation permits mining companies to keep secret the chemicals it uses in the fracking process. It makes it a crime for any citizen to reveal the contents of the fracking chemicals under any circumstances.

The essence of what the legislature and governor have done is to give energy corporations a license to drill, wherever and whenever, they want!