Advancements in wind power have made energy less expensive.

The remaining solid waste will be used to make biofuels. They’re putting contaminated water in and taking out valuable metals, clean water and producing fuel.”

January 3, 2015—To start the new year off on a positive note, let’s look back at seven advancements in renewable energy in 2014:

1. Wind power capacity has increased. Wind turbines have become more powerful, more efficient and more affordable. The increased size of the rotors on the wind turbine has raised the turbine’s capacity to generate electricity. By increasing the area of the rotors, from 70 to 100 meters, they can generate more energy at lower wind speeds

2. New research in nanostructure-based technology will make it more efficient for energy conversion in photovoltaic solar cells. The nano materials will allow more light to be trapped for future energy.

3. Advancements in renewable energy storage using quinone molecules, as those found in rhubarb, can be used in flow batteries at 1/3 the cost. (See the Planet Earth Weekly article titled, “The Organic Megaflow Battery.”)

4. A company called Heliateck, based in Dresden, Germany, is a leading company in the production of organic solar film. They have developed tinted glass that can be used on car roofs to generate energy. Also, architectural glass panels and windows incorporating HeliaFilm enable electricity to be generated at very low light levels with a level of high efficiency. “At the moment, Heliatek is making the transition from pure technology development to industrial manufacturing….to bring mass-produced organic solar films.”

Researchers are using algae to clean up contaminated water.

5. A Cornish tin mine in Cornwall, England, which closed in 1992, is using algae to clean up the heavy metals in the toxic water from the mine, while at the same time producing biofuel. This is in the very early stage of development. Researchers are “Converting the algae into a solid form which heavy metals can be extracted and recycled for use in the electronics industry. The remaining solid waste will be used to make biofuels. They’re putting contaminated water in and taking out valuable metals, clean water and producing fuel.”

6. For a twenty-four hour period in 2014, Germany generated almost 75% of its electricity from renewables. Earlier in 2014, renewables produced 27% of the country’s electricity. “Energiewende” for Germany means energy transformation, which has a goal of powering Germany entirely by renewables by 2050. Even though the transition is met by many challenges, the majority of Germany’s population support the change to renewables.

7. Researchers have advanced in the technology of making biofuels from wet farm waste, including corn husks, tomato vines and manure. Dry farm waste, such as wood chips, is much easier to turn into biofuels, as it doesn’t break down on the way to transformation like wet waste. Researchers at the Bio-Renewable Innovation Lab (BRIL) say, “We are taking what is now a net-negative resource in farm waste, which farmers have to pay to remove, and providing an opportunity for them to make money and help the environment.” It’s a win-win partnership!

So, onward into 2015! Let’s see what it brings in advancements toward a cleaner planet!

“It would store a day’s worth of sunshine from the solar panels on the roof of your house, potentially providing enough to power your household from late afternoon, through the night, into the next morning, without burning any fossil fuels.” Michael Marshak

September 3, 2014—What’s new in renewables? It’s not on the market yet, but it’s a metal-free flow battery that stores energy in chemical fluids outside of the battery instead of inside the battery. It can be stored in tanks. This battery, developed by Harvard scientists, can store electricity from solar or wind turbines at a very low cost and the amount of energy stored is only limited by the size of the tanks. To store the energy, the battery uses inexpensive, small organic, naturally occurring, molecules called quinones, which are abundant in green plants. The quinones used by the Harvard team are almost identical to the quinones in rhubarb.

Twice as Much Storage as a Conventional Battery

A team led by Michael Aziz, a physicist at Harvard, administered more than 10,000 charge carrying quinone molecules of a rhubarb like compound and incorporated them into the megaflow battery. Each carbon based molecule holds 2 units of electrical charge, compared to 1 unit in conventional batteries, storing twice as much energy as other batteries. The team showed that the battery works, generates a considerable amount of power and is inexpensive compared to other batteries. 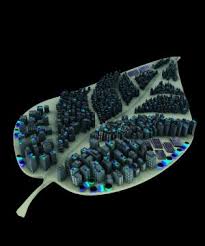 Quinones are naturally occurring molecules that can store energy.

In a wind turbine field, the tanks could be located underground or above ground or as one of the developers, Michael Marshak of the Harvard team, said, “Imagine a device the size of your furnace sitting in your basement. It would store a day’s worth of sunshine from the solar panels on the roof of your house, potentially providing enough to power your household from late afternoon, through the night, into the next morning, without burning any fossil fuels.”

I like that idea! An idea that furthers our efforts towards saving our planet for future generations!